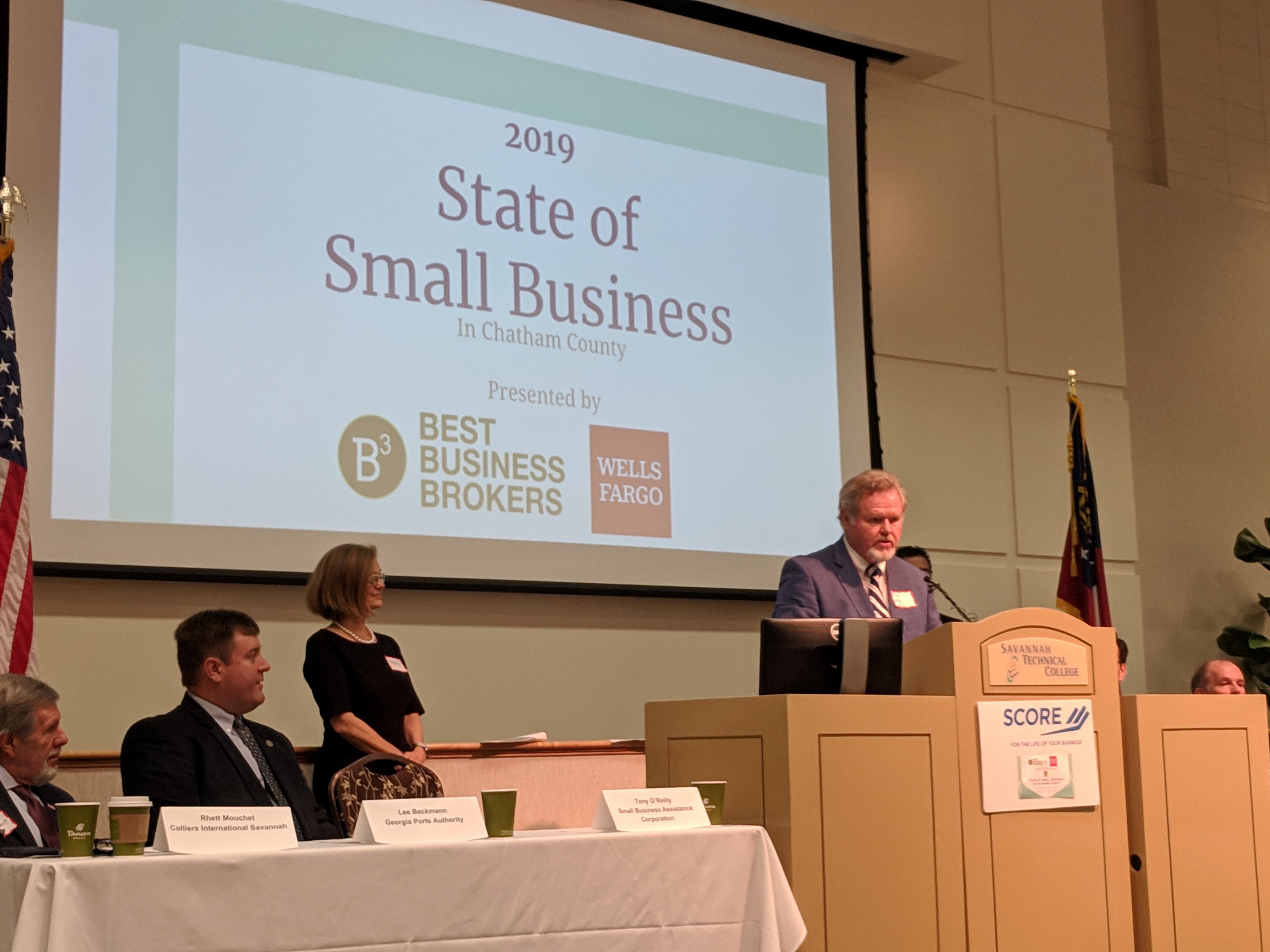 Small business owners and their supporters heard mostly glowing reports on the status of local small businesses as they gathered Wednesday morning for the seventh annual “State of Small Business in Chatham County” presentation. Experts representing various sectors of the local economy made their cases in Savannah Technical College’s Eckberg Auditorium, reporting on everything from a tight labor market to limited vacancies in commercial real estate.
“West Bay is a growth corridor,” noted Rhett Mouchet, associate broker with Colliers International, “and the Canal District adjacent to downtown is, too. We have the arena there that’s going to be a drawing card.”
Commercial real estate, depending on sector, varies from extremely tight in the industrial market to very weak in office properties, as developers are more interested in hospitality and retail product, Mouchet said.
According to Mouchett, the industrial sector accounts for about 64 million square feet of inventory in the area, with another 7 million square feet currently under construction. The vacancy rate in this sector in the first quarter of this year is 3.8%.
Multifamily development is also booming, with about 2,000 units currently under construction, he said, with Port Wentworth, Pooler and downtown Savannah as the hottest apartment development locations.
In retail, tourism and population growth in general is a driving factor for such things as supermarket expansion into the area’s suburbs, Mouchet said. The vacancy rate among retail ran 4.4 percent in 2018, and the average lease rate was $18.72 (although specialty centers and downtown retail space skewed significantly higher).
Business Savannah small business community hears experts at annual report
Small business, big port
Savannah boasts the fastest growing port in the country, reported Lee Beckmann, manager of government affairs for the Georgia Ports Authority – and despite the mega-business of retailers like Home Depot and Walmart, most ports customers are small businesses. He pointed to figures that show 25,047 of GPA’s 25,700 customers in fiscal year 2017 shipped 5,000 or fewer 20-foot equivalent units (TEUs, a common shipping industry metric). Small shippers like Jere’s Antiques in Savannah account for a large share of the ports’ customer base, and other small business impacts from the sprawling port include the numbers of independent owner/operators who make up the trucking force that moves goods loaded or unloaded here, he said.
“We’re investing heavily to accommodate the growth we see coming in,” he told Wednesday’s audience.
Access to credit
Another topic studied at the gathering Wednesday was small business access to credit, which was addressed by Tony O’Reilly, president of the Small Business Assistance Corporation.
“Quality start-ups are becoming a more significant portion of our loan applicant pool. The trend has remained consistent for the last five years. Business starts accounted for 43 percent of SBAC’s approved loans in 2018,” he said.
His agency has projects totaling $54.8 million in the works year-to-date for 2019, O’Reilly said, while in 2018, it processed and approved 60 loans for $23.5 million. In a longer view, over the past five years, SBAC funded 202 loans to new businesses, including new restaurants, hotels, manufacturers and retailers.
Broadband needs Gary Sanchez, regional director for AT&T, said small cells are the current mode of expansion for wireless capability, with 25 already deployed locally. These smaller, less intrusive and lower positioned devices are best suited to handle density, he said.
Video accounts for 75 percent of traffic now, he noted, and business consumers are now asking what their needs really are, given the difference in cost for high-speed systems and the fact video doesn’t actually demand impressive speeds.
Chatham County welcomed 107 new businesses in the first quarter of 2019, according to Dean Burnette, managing broker of Best Business Brokers. The small business world locally is also a mature person’s world, Burnette said. “Small business is still ruled by the Baby Boomers,” he said.
After hearing from the speakers, a question-and-answer session moderated by Michael Toma, Fuller Callaway professor of economics at Georgia Southern University, Armstrong campus, with topics ranging from wage prospects for hospitality workers to the greater tolerance of online lenders for risk to opportunity and economic opportunity zones.